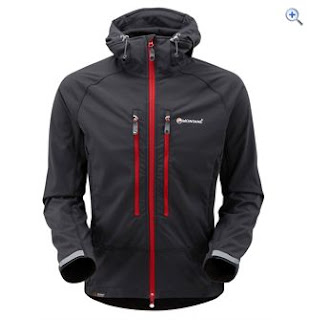 It was my birthday in January and as usual I was struggling to think of something suitable to have from Kay. I had been looking at two things being a Rab Vapour Rise pull on top but must confess that I already have one of these (which is great) so although this is quite old and they have been revamped it was not top of the list. The other item I had been looking at was the Montane Sabretooth Soft Shell Jacket. Since getting my Millet soft shell jacket over three years ago this has been my favorite jacket and it has been used extensively in all weathers and on many different activities. This is a fantastic piece of kit which is really lightweight, very wind resistant and has proved a great asset to be carried at the bottom of a rucksack. Its only disadvantage is that the hood is not that big and the pockets are limited in size hence why I had been looking at the Montane jacket. This jacket is described as a highly technical soft shell mountain jacket which had received Trail Magazine 2010 soft shell award BEST IN TEST. Their verdict was that it was "An excellent soft shell for wearing in typically mixed mountain weather."
The Trail magazine test said:
The real hero is the fabric. Polartec Powershield is a truly exceptional fabric. 90% of the time that you are outside this Powershield is probably the most comfortable and effective outerwear for the majority of mountain activities. Blocking 98% of the wind, highly breathable, water repellent and extremely abrasion resistant the Sabretooth has phenomenal potential. The advantages of a softshell are obvious, stretch for active comfort, less noise than a hard shell, warmth without weight and weather protective. Featuring the classic alpine features, adjustable hood, venting pockets and active tailored fit, the Sabretooth is the outerwear that gets worn, not carried.
In the past few years the Trail magazine tests have proved to be a very, very good way of deciding which kit to buy and generally I do refer to them before buying any equipment. With this in mind I decided the Montane jacket was what I wanted to have from Kay and although she pointed out how many jackets I already had it was ordered. Unfortunately we were out of luck and although I could have got one in January the cheapest place I found it said they would be out of stock until the end of March. Finally last week the jacket arrived and its first outing will be over the Easter Bank Holiday weekend when I am assessing two D of E expeditions who are using the centre. First impressions of the Montane Sabretooth jacket are that although it is not as lightweight and compactable as the Millet Jacket it would appear to be harder wearing and all four of the pockets are large enough for map, compass hat and gloves (all in separate pockets if you choose to use them). The hood is large enough for a helmet to easily fit under it and the construction may indeed be more weather resistant than other soft shell jackets.

The jacket had its first real test out on Easter Saturday when I was out assessing both a bronze and silver D of E Group. On the Saturday the weather was mild but the mist descended to a level of 300 metres and it was quite cold out on the Clwydian range of hills. Although I started in just a base layer as it was quite warm first thing in the morning by mid morning it had clouded over and so I put on the new Montane jacket. Initial impression was that the cut is quite short but that is not really a criticism just a comment as the short cut easily allowed access to trouser pockets. The jacket work superbly well and I kept it on all day. The pockets are large enough to carry a map and compass with room to spare and this in itself is a bonus. The jacket was good at keeping the wind off and even when I was moving quickly uphill through heather (therefore lots of moisture) the jacket was able to deal with this and wicked it away with no effort at all.

I used the jacket throughout the three days of assessing the silver expedition and it proved to be excellent at keeping me warm, free from condensation and dry from a light shower. All in all I would highly recommend this jacket and as it is considerably cheaper than my Millet jacket it is superb value for money. Well done to Montane on producing yet more excellent kit.

Since getting the jacket I have now used it extensively in various weathers and it has already become a favourite bit of kit. In the October 2011 Trail magazine they again ran their test on Soft Shells and the Montane Sabretooth came out as Trail Magazine Best Value and Trail Magazine Best in Test. It was the only jacket that got five stars in all the categories and the only jacket to come close was the Rab Vapour Rise Guide Jacket which is heavier, has less pockets and lost one star on performance. the only thing it does have is pit zips which can be useful so for seriously fast moving people this jacket may be a good option and Rab always make excellent kit so worth comparing.

Steve
I am currently one of the Centre Managers for Yr Hen Felin Cynwyd Activity and Mountain Centre. I am married to Kay who is the other Centre Manager and we have two children. I am a qualified Mountain Leader, an Accredited Practitioner with the Institute for Outdoor Learning, a Gold Duke of Edinburgh Award Scheme Expedition Assessor, a Scout County Assessor for Hillwalking and a County Adviser for Mountain Activities